We take businesses from red to black using a proven system focused on:

“I came across Universal Accounting Center and the book “In The Black” about 9 years ago when I was starting my own accounting business. I had graduated with an accounting bachelors degree the year prior and was excited to get started. I wanted to build a company that offered really good accounting and consulting services so that I could feel good about the quality of work I was providing my clientele as well as to earn a comfortable living doing it. Universal Accounting and In The Black offered me great knowledge and gave me the confidence I needed to succeed on my own. I still refer back to In The Black now 9 years later and use the principles outlined to help clients focus on the things that will really help their business. In The Black is a great foundation for consultations, and I have found it to be a very valuable resource in my practice. I highly recommend Universal Accounting to anyone looking to go out on their own, or to improve what they already have in place.”- Chris Webb

BizBench Reports benchmark a business against similar businesses in the same NAICS code in 51 key financial metrics using the extensive Risk Management Association (RMA) database of hundreds of thousands of businesses throughout North America.  It organizes, charts, and graphs the data into a meaningful presentation of the analysis, complete with comprehensive recommendations for improvement.  All in seconds after you have entered some basic data from the Income Statement and Balance Sheet. Used correctly, this comprehensive report can accelerate the Business Improvement Cycle in your own or your client’s business to get to the TOP 10% of the business’s industry in overall business performance!

The principles and concepts we use will help you immediately become more profitable in your business and to enhance your expertise and wisdom in business decision-making. 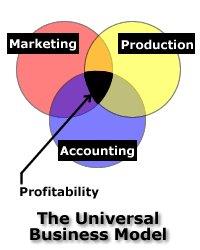 In the Black introduces the concept of the Wisdom Pyramid. It is a way of modeling the assimilation of data into meaningful and predictive business decisions.

You will learn how accounting is the primary source of data and how to use this data to work your way up the Wisdom Pyramid using reports and statistical analysis of your business data.

Every business decision that you make should be based upon experience (wisdom gained from past analysis of information) or upon current information. Without specific metrics to gauge your success, you will have no data to determine what things that you try are working.

To move up the wisdom pyramid, you have to experiment with new approaches. The difference between an company that is performing well and the true successes stem in large degree to how willing its management is to try new approaches and measure their success.

Without constantly reinventing yourself, you could find yourself in the same position of buggy whip manufacturers at the dawn of the automobile’s popularity. Even though the product they made fit a former need well, the world moved on without them. No company can afford to find themselves left behind. Continued measurement and course adjustment will assure that you never are.

“In the Black” explains how each department must communicate with every other department, and how it directly affects profitability. “In the Black” introduces a model for increased profitability, the Universal Business Model.  Any business functions that act independently of the other three can single-handedly doom a company. For example, if Marketing has not been informed by production as to what it currently manufactures, marketing dollars get wasted. Likewise, if manufacturing is not told by accounting what products are profitable to produce, they may operate at a loss.

In the Black explains how each department must communicate with every other department, and how it directly affects profitability.

In the Black introduces a model for increased profitability, the Universal Business Model.

Any business functions that act independently of the other three can single-handedly doom a company. For example, if Marketing has not been informed by production as to what it currently manufactures, marketing dollars get wasted. Likewise, if manufacturing is not told by accounting what products are profitable to produce, they may operate at a loss.

A good example of this is a frame shop that bragged how much business that it was bringing in and how much it was taking business away from its competitors. Upon further analysis, it was found that they were operating at a loss on every sale. They could undercut their competitors only because their competitors couldn’t afford to sell the frames at the price either. The key difference is that their competitors were are aware of the fact.

In the example above, the most disturbing thing is that the frame shop was not even aware of its failure. Often, without communication between divisions of a company, each function of a company may be doing well in and of itself, but the company as a whole suffers.

Metrics within each function of a company should reflect its contribution to the whole, and not independent of the other business functions. When one basic business function is working well, but independent of the success of the company as a whole, it is a bit like two people on a small boat out to sea. One person says to the other in an accusing manner, “Your half of the ship is sinking” When the boat goes under, it will be of little comfort to the accuser if his half of the boat sinks last.

In much the same way, if production is cranking out widgets at a record pace and marketing can’t interest customers in it, the company suffers. If the product is not making the company money and the accounting function doesn’t report it, likewise the company as a whole suffers from lack of key business knowledge. A company’s functions win or lose together. Finding the source of fault only provides useful information when there is still time to do something about it. A coroner wastes his time scolding bodies on his slab when he tells them they should have exercised more. Make sure that you don’t wait to analyze your accounting data during a “postmortem” exam. 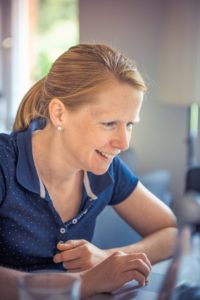 As you learn to increase communication across the business functions of marketing, production, and accounting, you become more profitable as a natural consequence.

When production knows from the marketing function what products and services that customers want, they know what to produce to make the company more profitable. Likewise, if the accounting function of the company informs marketing that costs have risen for a particular product, marketing now knows to raise the price of the product to maintain profitability.

Many examples of these cross-function interactions are given in In the Black to give models from which to apply the principles to your own business.

Of course, profitability should be the goal of every business. Regardless of how well that marketing, production, or accounting work on their own, it is only when they work well in concert that profitability is achieved. A business that cannot sustain itself by staying in the black cannot hope to stand the test of time, and the most basic measurement of a company’s success is its very survival.

Don’t be content to merely survive. With the process of continual improvement outlined in In the Black, you will find ways to maximize your profit that you had never dreamed of. Continually monitoring the effectiveness of your efforts through good accounting practices will help you to achieve the business wisdom to know what works and what works better.

For updates, events and inspirational thoughts follow us on our Facebook fanpage for business owners and presidents as we focus on building value in the business